Since 2002, DAARI has been researching possible destinations and activities in the context of textile tours. The direct cause for this research was a request from one of the participants of the first East Coast Tour. She is an active member of the Dutch Federations of Weavers' Circles (FLWK). Since DAARI's prime work area, along the east coast, appeared to include a number of interesting textile sights, she asked me (robert-jan) to organise a special textile tour. Naturally, she was closely involved in the preparations.

In the meantime there have been six textile tours (in 2003, 2004, 2007, 2008, 2009, 2011 and 2013). Those of 2003 and 2004 included a number of highlights, excursions to important production centres of hand woven fabric: Kanchipuram, famous for its fine, gold-laced, silk sarees; Pochampalli and Koyyalagudem, both relatively recent production centres of cotton and silk ikat fabric; and Nuapatna, which is invariably mentioned in the context of the old ikat tradition of Orissa. In addition, we paid attention to the fine embroidery of West Bengal (kantha) and the weaving of the fine cotton 'dress material' of Mangalagiri.

The participants of the tours were enthusiastic. Many of them asked me to organise a second tour along a different route. This resulted in the tour of 2007. The route was outstanding and the tour was a big success. The last tour took place in 2013. Robert-Jan who organised and guided the tours presently thinks of partly settling in Vijayawada (India), among other things to investigate possible destinations in the context of tours for small groups and individuals. Although the tour will no longer be organised, its description is still part of this website. It serves as a source of inspiration for travelers.

Ahmedabad and surroundings (5 days)
Ahmedabad harbours the world famous Calico Museum of Textiles which displays a unique historical collection of textiles, exposing the unparallelled textile tradition of India. Not far from the city, in Patan, there are still some families which produce Patola (double ikat) sarees. Apart from these textile-related sights, the city includes a colourful, chaotic old centre: a maze constituted by small Islamic, Hindu and Jain 'blocks', by tall houses, temples and mosques built in various, often synthetic styles. Ahmedabad is also the city of Mahatma Gandhi. There are various sights which refer to him. A visit to his (Sabarmati) ashram can be impressive.

DAARI organises an excursion to one of the few remaining Patola weaving families of Patan. On the way to Patan we stop at the famous Sun Temple of Modhera and the Rani-Ki-Vav step-well, a spectacular, richly decorated well-complex. Of course, we visit the Calico Museum. We also participate in a walk through the old city organised by a local heritage trust. The Gandhi ashram and the municipal museum can be visited on one's own initiative. DAARI furnishes addresses of shops and markets which sell the fine embroidery and tie & dye products from Kutch.

From Ahmedabad we fly to the South. Our first stop is Hyderabad.

Hyderabad and surroundings (4 days)
Hyderabad is an old Muslim stronghold in the Hindu-dominated South of India. In the Walled old town the atmosphere is oriental. There are a number of immense Muslim monuments and busy bazaars.

We visit the workshop and showroom of Creative Bee, a production and trading company specialised in extraordinary hand crafted textiles which is run by a prominent textile designer, Bina Rao, and her husband, Keshav Rao. We also apln to visit the stoch rooms of Dastkar Andhra, a NGO that has adopted a number of weavers' clusters in Andhra Pradesh, designing and marketing their products. Dastkar Andhra has done some path breaking work in the field (reintroducing) natural dyes.

One of our days in Hyderabad is completely dedicated to the art of ikat weaving. It's a one hour's drive to Koyyalagudem, a quiet and rustic ikat weavers' village with spacious weaver's houses built in typical Nalgonda style. The local weavers' co-operative guides us during a village walk and introduces us to the various aspects of ikat weaving. It also invites us for a lunch made up of local dishes.

From Hyderabad we take the evening train to Visakhapatnam.

Visakhapatnam - Vijayawada (9-10 days)
Visakhapatnam is the starting point of a bus tour of the north-eastern coastal areas of Andhra Pradesh. It offers a combination of beach, sea, palm trees, paddy fields, temples and.... of course, textile.The tour begins near Visakhapatnam, on the deserted beach of the hamlet of Rushikonda. We stay in cottages on a hill overlooking the beach and the Bay of Bengal. The quietness of this place and the typical holiday feeling it evokes is a nice change from the hectic atmosphere of the large cities of Ahmedabad and Hyderabad. Although it seems good to relax and enjoy the tranquility, for those who want to do some sight seeing there are several options around: an interesting and pleasant zoo, a graceful temple on top of a hill; and the remains of a 17th century Dutch trading post, including a cemetery.

From Rushikonda we travel by (our own) bus to Haripuram, a small village. Here we are the guests of BCT, a NGO working in the villages. We visit a nearby potters' village and the BCT residential high school. The school adheres to a curriculum that includes vocational training, such as the production of lacquer ware and the spinning of cotton. The school-spun cotton is woven into dhoti's by weavers living in a nearby village.

We spend the night in the BCT compound. The next day we travel to Kakinada, a dusty seaport town. On our way to Kakinada we stop at the picturesque village of Etikoppaka to visit a local lacquer ware producing co-operative which uses naturally coloured shellac to finish its decorative wooden products. Before reaching Kakinada we will spend some time with the weavers of Uppada, who have specialised in amazingly delicate silk (Jamdhani) weaves. We will be shown around by the chairman of the local master weavers association.

Kakinada is the starting point of a tour through the tropical palm tree and paddy field landscape of the Godavari (river) delta. On our way we pass through many enchanting villages with lots of traditional, tiled houses. We will spend the afternoon and night in our hotel on the banks of the Godavari river. The next day, we will move on to Srikakulam, a small village in Krishna district. For the second time we stay in a beautiful, green compound of a NGO (ASM) working in the villages.

Our destination of our last bus tour day is Vijayawada, a traditional trading town situated on the banks of the mighty river Krishna.  However, we will go a long way round. First we drive to Pedana, a small town well-known for its block print-kalamkari fabric. We spend some hours watching the intricate process of printing, boiling and rinsing. We also visit the workshop of a prominent block maker. In fact, the block maker is our local guide.  On our way to Vijayawada, we will  pay a visit to the famous classical dance academy of Kuchipudi. We spend several days in Vijayawada. On our first day, we are the guests of SKCV, a local street children project. On our second day we go for a walk through the labyrinth of the old town. On our final day we visit the weavers of Mangalagiri and the cave temple of Undavalli. In Vijayawada we are guided by staff members (ex-street children) of SKCV.

Tirupati and surroundings (3 days)
Tirupati is situated at the foot of the seven wooded hills of Tirumala. The top of the seventh hill harbours the old Hindu temple of Venkateshwara, which attracts thousands of pilgrims every day. The town is completely fixed up to receive, house and feed its daily streams of believers. In addition to the Venkateshwara temple (in the hills), there are several smaller shrines and an old home for wandering ascetics in the town itself.

Near Tirupati, there is another famous temple: Sri Kalahasti. This is the cradle of the real kalamkari: bamboo pen drawings on fabric. Any serious book or article on kalamkari refers to Sri Kalahasti and many museums around the world display the large wall hangings with cartoon-like depictions of scenes from the Hindu epics made in Kalahasti.

Near Tirupati and Sri Kalahasti there is a small town called Venkatagiri. Among its inhabitants there are thousands of weavers. Some of these weavers have specialised in very fine weaves, others still weave their traditional Venkatagiri sarees.

Our programme includes a walk through the hills to the Venkateshwara temple and an excursion to Venkatagiri and Sri Kalahasti. At Sri Kalahasti a prominent kalamkari artist will introduce us to his art and at Venkatagiri we will be shown around by one of the local master weavers.

After a short trip by train we arrive at the end of the weavers' route: Chennai.

Chennai (2-3 days)
Chennai (Madras) is a both traditional and modern seaport city, built around the British Fort St. George and a great number of villages. It is the centre of classical (South) Indian music and dance and it harbours a number of interesting, old village temples, e.g. those of Mylapore and Triplicane. We stay in a well-known, traditional, South Indian hotel situated at the edge of Mylapore - an erstwhile Brahmin village which presently is a colourful centrally located neighbourhood. 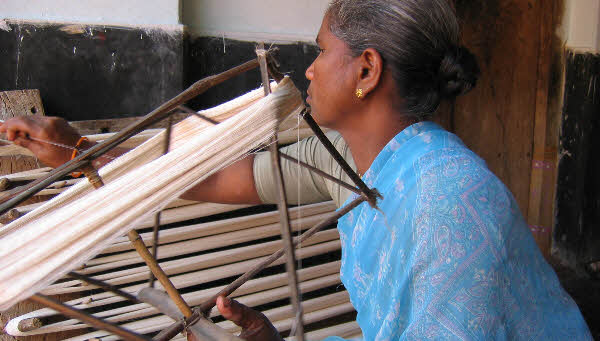 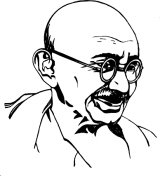 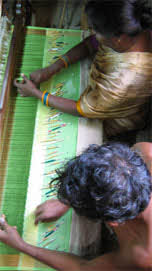